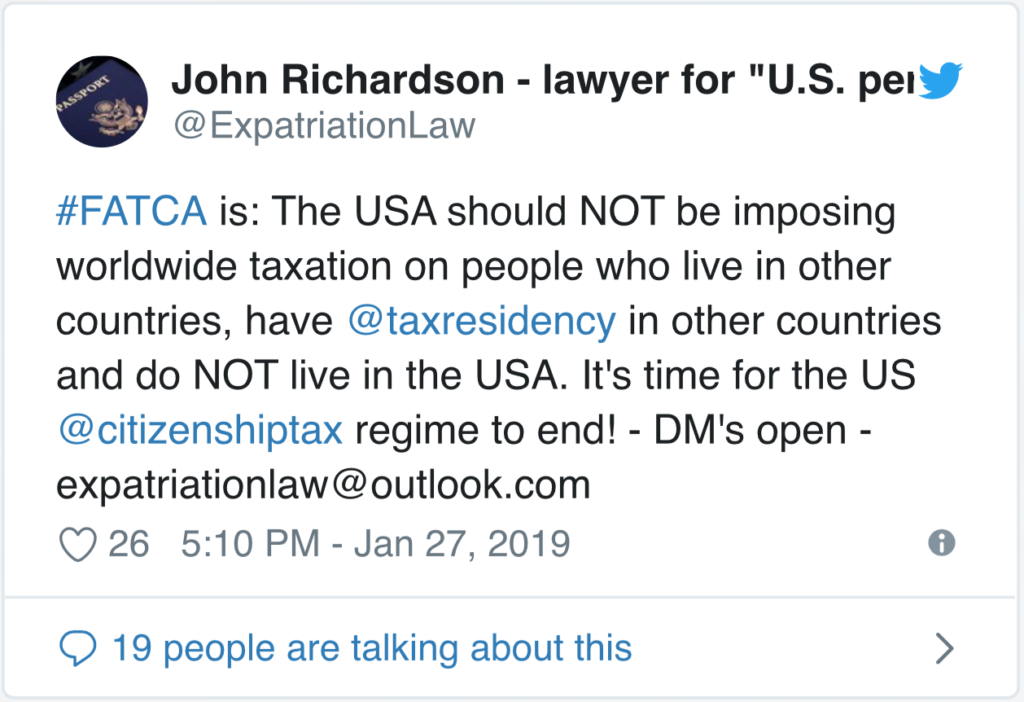 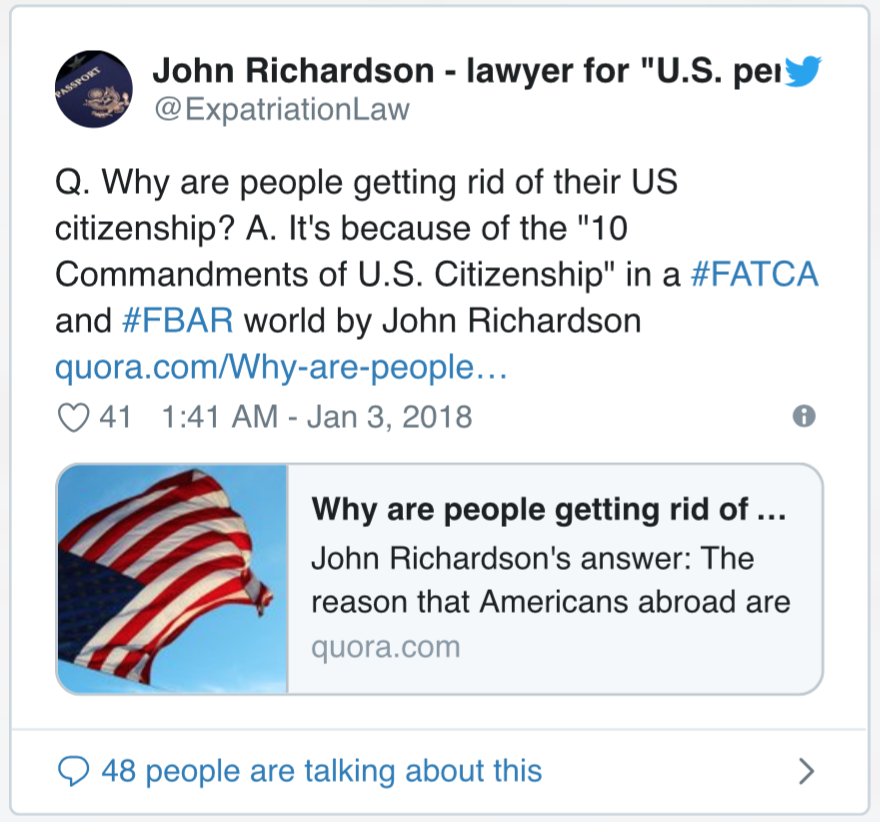 “The United States should NOT be imposing worldwide taxation on people who are tax residents of other countries and do NOT live in the United States.”

1. There are few countries that confer citizenship based ONLY on being born inside the country; and

2. There are only two countries impose worldwide taxation based only on citizenship.

Advocacy for ending or minimizing the harmful effects of FATCA and U.S. citizenship-based taxation:

FATCA is a tool to enforce the imposition of the Internal Revenue Code on tax residents of other countries. In other words, FATCA is the tool to enforce  U.S. taxation  of the residents of other countries. For the  most part FATCA impacts people who do NOT live in the United States. It’s most egregious impact is on “accidental Americans” (people who were born in the United States but do NOT consider themselves to be U.S. citizens). I am opposed to FATCA.

I am the Co-Chair of the Alliance For The Defence of Canadian Sovereignty  which has brought a lawsuit against the Government of Canada for changing Canadian law to implement the U.S. FATCA law (via the IGAs) in Canada. A history of the lawsuit (Law Students edition) is available at the Alliance blog and is here.

As an “independent” I have worked tirelessly with individuals (regardless of political affiliation) to facilitate change to the current U.S. citizenship-based taxation regime. U.S. taxation of residents of other countries is unjust and is NOT a partisan issue. I have worked independently and with groups. I have delivered live presentations to groups of Americans abroad and accidental Americans in Canada, Europe, Australia and New Zealand. Examples of my work with organizations include (but is not limited) to moderating the 2014 ACA “Kirsch Schneider” citizenship taxation debate which took place in Toronto, Canada.

I have worked with those whose work culminated in the 2018 “Tax Fairness For Americans Abroad Act 2018” which was introduced by Congressman Holding. I am proud to continue to work  with Solomon Yue and others on this important initiative.

My advocacy against the extra-territorial application of U.S. taxation and FATCA includes the following:

Submissions to the Select Budget Committee of New Zealand – On FATCA

Paying Tribute to America – Submission to the New Zealand Budget Committee on a FATCA IGA – February 12, 2014 – Discussion and commentary

Further submission to the New Zealand Budget Committee on FATCA and the U.S. Exit Tax – February 27, 2014 – Discussion and Commentary

Submission to the Canadian Department of Finance – On FATCA

Richardson submission to the Canada’s Standing Committee on Finance in conjunction with Bill  C-31 Part 5 (FATCA provisions) – Discussion and commentary of May 14, 2014 witness appearance here

Paper delivered at the “Alternative Academia Citizenship Conference” – May 2014